Welcome to the Museum and Gallery of the Northern Plzeň Region in Mariánská Týnice –  a former pilgrimage place belonging to the nearby monastery in Plasy whose historical development Mariánská Týnice has shared. In 1230 Roman of Týnec bequeathed Týnec (from the name it can be assumed that it was a circumvallated farmstead) to the monastery in Plasy. In the Middle Ages Cistercians built there a pilgrimage church, for which a sculpture of the Annunciation was made in the first half of the 16th century. After the years of wilting between the Hussite Wars and the Thirty Years’ War the monastery in Plasy started a new boom in the second half of the 17th century. The development culminated in the 18th century when the pilgrimage place in Mariánská Týnice was completely transformed. The former medieval building was extended with an arcade (documented on a period photo) and in 1699 a provostry was established there. However, a new complex of buildings started to grow next to it soon. It consisted of the church of the Annunciation and a new two-floor provostry building  with arcades connected to the church. The construction was assigned by Eugen Tyttel, Abbot from the monastery in Plasy, and it was designed by the significant baroque architect Jan Blažej Santini Aichl. The foundation stone of this building was laid in 1711 but the project was not completed fully. The economic difficulties of the monastery in the second half of the 18th century and eventually, the dissolution of the monastery by the Emperor Josef II in 1785 brought the construction to a stop. In the 19th century, when the Plasy demesne belonged to the Metternich Family (since 1826), the whole object gradually went to ruin. The building, partly used for farming purposes, started to decay and the devastation climaxed in 1919 – 20 when the church cupola collapsed. 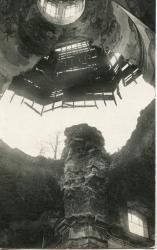 It was only then that the Jednota pro záchranu Mariánské Týnice (the Association for the Preservation of Mariánská Týnice) was established. It was led by the architect Hanuš Zápal who started a gradual reconstruction of the whole complex. His activities were resumed by a museum established in Mariánská Týnice in 1952. The reconstruction and restoration work was intensified after 1990 with the help of state administration, the Ministry of Culture and local administration when the provostry facade was completely renovated, both towers (clock and bell towers) were newly completed and the court was adapted. Since the second half of the 1990s reconstruction work had been carried out in the church which culminated with the re-mounting of the cupola in 2000 with the following interior adaptation and the beginning of the facade reconstruction.

Contemporary exposition in the Museum of the Northern Plzeň Region was opened between 2005 and 2008 and modified. 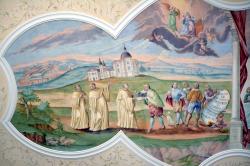 The exhibition hall is placed in the former monastery refectory decorated by baroque frescoes. The left part of the ceiling fresco depicts the donation of Mariánská Týnice to the Cistercian monks by Roman of Týnec and on the right there are monks feasting with the Virgin Mary and an Angel. The medallions on the walls show besides the portraits of abbots an ideal image of Mariánská Týnice and the monastery in Plasy. There is an organ dating back to the 18th century in the front end of the hall.

Change in appearance, Structure of pages, print out